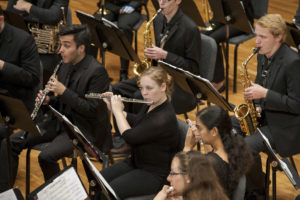 TCNJ Wind Ensemble is the premiere wind band at The College of New Jersey. An auditioned ensemble comprised of approximately 50 musicians, the ensemble exposes student to the finest repertoire composed for wind band. The ensemble has toured the northeast region, including a performance at the 2014 CBDNA Eastern Division Conference in Boston, MA. The ensemble has collaborated with notable soloists and composers, and has completed a series of recordings for Kalmus Publishing, Mark Custom Recording, and Alfred Reed.

Notable world premieres by the TCNJ Wind Ensemble include: