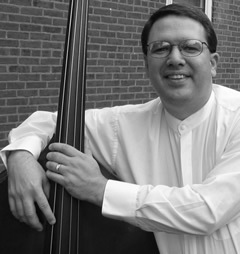 Mr. Clark is an Adjunct Instructor of Music at TCNJ where teaches:

Chris Clark has been a part of the musical life of The College of New Jersey since 1999, when he joined TCNJ Orchestra rehearsals for Gianni Schicchi and Suor Angelica by Puccini. As adjunct artist-faculty since 2004, he has given solo faculty recitals, has been a guest artist with TCNJ’s Jazz Ensemble and TCNJ Orchestra, and has taken part in jazz faculty recitals with TCNJ colleagues, and guest artist and alto saxophone legend Richie Cole. In addition, he has given TCNJ performances of original guitar and bass arrangements of the music of Frank Zappa with longtime collaborative guitarist-arranger and TCNJ alumnus Kevin Kuchinsky, and has performed the Koussevitzky Concerto as soloist with the Bryn Athyn Orchestra conducted by Dan Kujala.
In 2012, Mr. Clark appeared on the CD Fitness Rock & Roll by Miss Amy and Her Big Kids Band, which received a Grammy nomination for Best Children’s Album, and he continues to collaborate with Amy Otey and her husband Alex Otey as a jazz and popular music styles bassist. Most recently, Mr. Clark joined fellow string faculty at TCNJ’s Mayo Concert Hall to give the world premiere of Harold Levin’s before and after…(2014) for viola and double bass, a companion piece to the second movement of Dittersdorf’s Sinfonia Concertante. In 2015, Mr. Clark ushered in American premieres at TCNJ of The Last Poppy, a piece for three double basses, and the poppies blow... for double bass and piano, both by English composer David Heyes. In addition to preparing solo double bass works and works with piano for recital performances, Mr. Clark also belongs to a commissioning group dedicated to fostering the composition of new double bass works through private donations.