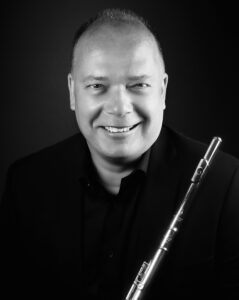 David DiGiacobbe has served as the Director of Flute Studies at The College of New Jersey since 2000 where he teaches:

Professor DiGiacobbe has proudly served as Artist Teacher of Flute at the College of New Jersey since August 2000. He has received critical acclaim for his solo, orchestral, and chamber music performances, in addition to his numerous appearances as a flute clinician and masterclass teacher. He has hosted masterclasses at TCNJ with such artists as, Robert Langevin, Keith Underwood, Bart Feller, and Paul Edmund Davies and the New York Philharmonic Wind Quintet.

Mr. DiGiacobbe is a graduate of Temple University and received his Artist Diploma in Flute performance from the Conservatory of Music in Lucca, Italy. His principal teacher was the legendary flutist, Julius Baker. As winner of the 1995 International Flute Competition in Riva del Garde, Italy, he has appeared for Italian radio & television, and at several major European music festivals. Since then he has given masterclasses in the US, Canada, South and Central America, and Europe.

As a soloist and clinician, he has appeared with the NJNEA All State Music Conference in Trenton, NJ and as a soloist and recording artist with the Eastern Wind Symphony. He has appeared as performer/clinician for the New York Flute Club, NJ Flute Society, Flute Society of Greater Philadelphia, Mid-Atlantic Flute Symposium, among others. In 2004 he performed the South American premier of the Christopher Rouse Flute Concerto with the Bogota Philharmonic for National Television in Columbia. As a concerto soloist, he has appeared with the Harrisburg Symphony, Lancaster Symphony, The Chamber Orchestra of Philadelphia, Eastern Wind Symphony, and the TCNJ Wind Ensemble and Orchestra.

David spends his summers in Austria, where he serves as Orchestra Manager and flutist of the AIMS Festival Orchestra in Graz (Austria). He has held teaching positions at Temple University, The University of Pennsylvania, Widener University, and at the Lynn University Conservatory in Florida.