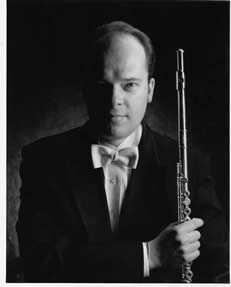 David DiGiacobbe has served as the Director of Flute Studies at The College of New Jersey since 2000 where he teaches:

Prior to coming to TCNJ, Mr. DiGiacobbe taught at Temple University, Germantown Academy, and was a teaching assistant at the Conservatory of Music in Lucca, Italy. Each summer, Mr. DiGiacobbe serves as the Orchestra Manager and Principal Flutist of The American Institute of Musical Studies (AIMS) Festival Orchestra in Graz, Austria. Mr. DiGiacobbe is a graduate of Temple University and the Conservatory of Music in Lucca, Italy, and his principal teachers include Julius Baker, Renee Siebert, and Jeffrey Khaner. Mr. DiGiacobbe is Principal Flutist of both the Harrisburg Symphony and Lancaster Symphony Orchestra in Pennsylvania. A winner of the 1995 International Flute Symposium in Riva del Garda, Italy, Mr. DiGiacobbe has appeared for Italian radio and television and at several European Music Festivals in Florence, Milan, Bolzano, Graz (Austria), and Maribor (Slovenia). He has given Master Classes in Austria, Italy, Colombia, and across the U.S. As a concerto soloist, he has performed concerti by Bach, Mozart, Nielsen, Boulez, Christopher Rouse, and Lowell Liebermann, among others, appearing with the Harrisburg Symphony Orchestra, Lancaster Symphony Orchestra, and on National Television with the Bogotá Philharmonic in Colombia. Mr. DiGiacobbe appears frequently as guest Principal Flute for the Pennsylvania Ballet Orchestra, Delaware Symphony, and the Philadelphia Virtuosi.