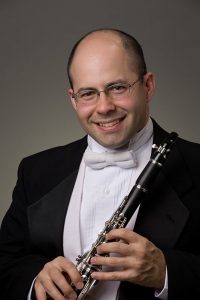 Joshua L. Kovach is Adjunct Professor of Clarinet at The College of New Jersey, where he teaches:

Pennsylvania Ballet Orchestra clarinetist Joshua Kovach was born into a musical family in Philadelphia. His teachers have included Donald Montanaro, David Weber, Mordecai Appelbaum, and Ronald Reuben. He maintains an active teaching and performance schedule, having played with the American Ballet Theatre Orchestra, Delaware Symphony, Network for New Music, Opera Philadelphia, Academy of Vocal Arts, Richmond Symphony and The Philly Pops. In addition, he performs regularly with the Harrisburg Symphony, and currently serves as Second Clarinet of the Reading Symphony Orchestra. He has performed under such conductors as Sir Neville Marriner, Luis Biava, Yuri Temirkanov, Corrado Rovaris, and James Levine. He was twice invited to perform with the Curtis Symphony Orchestra during their tours to Verbier, Switzerland.

Mr. Kovach has a strong interest in contemporary music and has premiered many new works in both orchestral playing, and as a member of Chamber Music Now. He has performed chamber music with members of the Philadelphia Orchestra of which he has substituted. He is a frequent recitalist, having played in New York, Rock Hall, the Ethical Society of Philadelphia, and the Academy of Music Ballroom. Mr. Kovach can be heard on recordings for the Vox, Albany, Centaur, innova, New Focus Recordings and Warner Home Video labels.

As a teacher, Mr. Kovach was appointed to the position of Clarinet instructor at West Chester University from 2003-2005. In the Fall of 2016 he was appointed clarinet instructor at The College of New Jersey. Mr. Kovach has also served as a judge for The Philadelphia Orchestra’s Albert M. Greenfield student competition. He enjoys performing and giving master classes as a member of Liberty Winds, a woodwind quintet that has travelled to Cuba, Guatemala, Nicaragua and Haiti. Mr. Kovach received his Bachelor’s and Master’s degrees in clarinet performance with honors from Temple University.