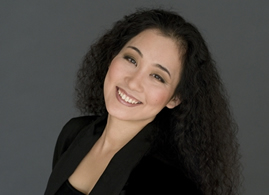 As a versatile recitalist, concerto soloist, chamber musician, and collaborative artist, Japanese pianist Tomoko Kanamaru has garnered the respect of musicians and the acclaim of critics. The Philadelphia Inquirer described her as a “charismatic pianist,” while Ken Keaton of the Palm Beach Daily News wrote “Kanamaru played exquisitely, whether brimming with rhythmic drive or melting with lyricism,” in his review of a concert by Kanamaru and violinist Gareth Johnson. Kanamaru continues to capture audiences’ attention with her stunning virtuosity and unequaled sense of lyricism.

Tomoko Kanamaru made her first public performance with a professional orchestra at the age of nine in Japan. She has since then been seen in numerous concert venues in the world, including Weill Recital Hall at Carnegie Hall in New York; Perelman Theater at the Kimmel Center in Philadelphia; Sumida Triphony Hall in Tokyo; and Stefaniensaal in Graz, Austria. She made her concerto debut in the United States with the Savannah Symphony Orchestra as part of the Orchestra’s classical series in December 2000. During the summer of the same year, Kanamaru was featured in one of the National Repertory Orchestra’s concerts at the Breckenridge Music Festival in Colorado. Kanamaru also appeared with the Toledo Symphony and with the Binghamton Philharmonic, performing Tchaikovsky’s First Concerto, and Stravinsky’s Petrushka respectively. During the 2009-2010 season, she performed Liszt’s First Concerto with the Middletown Symphony Orchestra (Ohio) for its Season Finale Concert. Most recently, Kanamaru performed Tchaikovsky’s First Concerto with the Symphony of Southeast Texas as a part of the Classical Master Series Concert, in addition to two performances of Petrushka with the Annapolis Symphony.

As a chamber musician, she made her debut appearance as a guest artist with Glinka’s Grand Sextet for the Philharmonic Ensembles at Merkin Concert Hall in New York. She also performed the Mozart’s Quintet with the Philharmonic Quintet of New York, and made a recital appearance with the Metropolitan Opera Orchestra’s members at Yumeria Hall in Tokyo during the company’s Japan Tour. During the 2011-12 season, Kanamaru performed in three concerts for the New York Chamber Music Festival, including the September 11 Tenth Anniversary Commemorative Concert with violinist Elmira Darvarova. New York Times critic Allan Kozinn described the performance as “focused” and “energetic.” She later returned to the New York Chamber Music Festival for four concerts, including a program “Brahms and Friends” as a part of the Delphinium Trio. The Trio was also featured in the season opening concerts in the 11th Red Rocks Music Festival in Phoenix and Sedona, Arizona. Other past appearances include concerts presented by Karl Böhm Foundation in Germany, Rode Kruis Amsterdam in Holland, International Horn Society/Griffith University’s Queensland Conservatorium in Brisbane, Australia, Royal College of Music in Stockholm, Sweden, the Kravis Performing Arts Center in Florida, and Bechstein Piano Centre in New York for the Grand Opening Series among others.

With an enthusiasm for new music, Kanamaru has performed works by acclaimed contemporary composers: she premiered Eric Ewazen’s Trio, Gold Cost Harmony with MirrorImage, horn duo, with which she also premiered Paul Basler’s Majaliwa during the Fall 2009 Tour at ten US venues. Kanamaru’s performances have also been heard on radio broadcasts, television, and commercials in the United States, Japan, and Canada. She has recorded solo and chamber music works for the Nippon Columbia label. She has also performed in the MirrorImage at the Opera, which was released from The MSR Classics during the summer 2008.

Besides maintaining an active performance schedule, Kanamaru has devoted herself to teaching piano and collaborative arts, and is a sought-after lecturer and guest speaker across the country. Through the invitation of the Yamaha Corporation of America, she has given master classes and seminars to teachers in Los Angeles, Minneapolis, San Antonio, Fredericksburg, Chicago, and Washington D.C. In the university level, her master class/lecture appearances include at Indiana State, Syracuse, and Carnegie Mellon Universities, among others. An avid adjudicator, Kanamaru has taken part in such regional events as the NJMTA State, Westminster Choir College Annual Piano Scholarship, the Greater Princeton Steinway Society, and Cecilian Young Artist Competitions, in addition to the National League of Performing Arts’ National Young Virtuosi Recital Winners Concert.

Kanamaru has written articles for several publications, including such leading music magazines in Japan as the Musica Nova and the Pipers, in addition to co-editing more than 30 volumes of educational piano music with the Yamaha Music Foundation. She continues to be active in her editing works: her most recent projects include the piano reduction part of Lauren Bernofsky’s Trumpet Concerto, which is published from the Balquhidder Music. During the summer of 2009, Kanamaru presented a workshop at the National Conference on Keyboard Pedagogy in Chicago, and the Washington Post included an interview with her on the subject during the same week. She was also interviewed for the BBC’s The World Today, which was broadcast worldwide.

Kanamaru holds a bachelor’s and a master’s degree from Musashino Academia Musicae in Tokyo, an Advanced Certificate in Piano Performance from The Juilliard School, and a Doctor of Musical Arts degree in Piano Performance from the University of Cincinnati College-Conservatory of Music. Her principal teachers include Tetsuro Ishikawa, Jeffrey Kahane, Eugene and Elisabeth Pridonoff, and Yoheved Kaplinsky. She continued to study periodically with the late Benjamin Kaplan in London over the course of twenty years, while receiving coaching from Maestro Ignat Solzhenitsyn on occasions. Having previously held teaching positions at the University of Cincinnati College-Conservatory of Music, College of Mount St. Joseph, Kanamaru currently serves as Associate Professor/Keyboard Area Coordinator at The College of New Jersey.