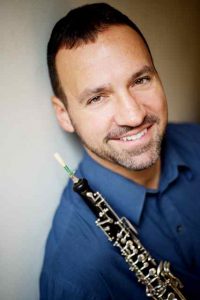 Dr. Mark Snyder is an Adjunct Instructor of Oboe at The College of New Jersey where he teaches:

Dr. Snyder has presented solo recitals throughout the northeast, including Trinity Church at Wall Street and The Cathedral of St. John the Divine; has recorded for Koch International Records and Albany Records; and is a founding member of the chamber ensemble Pastiche, winner of the Artists International Chamber Music Award in 2000. He is also a member of the oboe trio, Threeds, whose CD released include Palette and Unraveled.

Dr. Snyder began his musical studies at the Pennsylvania Governor’s School for the Arts and received his Bachelor of Music degree from the University of Connecticut, Master of Music degree from the Manhattan School of Music, and the Doctor of Musical Arts degree, from the Mason Gross School of the Arts, Rutgers University.  He has studied with Joseph Robinson, Matthew Sullivan, Keisuke Wakao, Ronald Roseman, and Sandy Consiglio.

Dr. Snyder is also on the faculty of Rowan University; Western Connecticut State University; and The Lawrenceville School.