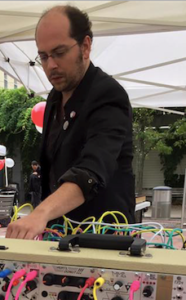 Quinn Collins is an Adjunct Instructor of Music Technology at The College of New Jersey where he teaches:

Mr. Collins is a composer of rhythmically engaging acoustic and electroacoustic music, combining rigorous formal schemes and processes with rock energy.  Also active as an improvisor, he is a member of the duo llama/lama with Paul Schuette; is a turntable/electronics performer in The Miz’ries, a digital hardcore trio with Jeff Snyder and Leila Adu; and plays bass guitar in the multimedia large ensemble Erik Ruin’s Ominous Cloud Ensemble.

Mr. Collins’ music has been a fellow at festivals and residencies including MusicX, the Young Composers Meeting, the Bang on a Can Summer Institute, Sentieri Selvaggi’s masterclass with David Lang, the Atlantic Center for the Arts with Paul Dresher as Master Artist, the New Music Gathering, and the Electroacoustic Barndance.  His music has been performed at venues such as Bard College, Princeton University, Arraymusic, Unruly Sounds Festival, Center for New Music, DiMenna Center, West Chester University, Mise-En Place, Firehouse Space, Chamber Music America at Bryant Park, The Cell, Symphony Space, William Paterson University, Sydney Conservatorium, Fast Forward Austin, Le Poisson Rouge, University of Illinois, University of Cincinnati, and Bimhuis.  His music has been performed by ensembles such as Mobius Percussion, The Living Earth Show, Dither, The Guidonian Hand, loadbang, Ogni Suono, Newspeak, and So Percussion. Recordings of his music have been released on Belts & Whistles, Teal Creek Music, and Underwolf Records.

After being mentored by William Duckworth while in high school, Mr. Collins earned a B.M. in composition in 2005 at the University of Cincinnati’s College-Conservatory of Music, studying with Michael Fiday and Frederic Rzewski. He then completed his M.M. in composition at the University of Illinois, Urbana-Champaign in 2009, studying with Zack Browning, Erik Lund, and Scott Wyatt. Collins holds an M.F.A. from Princeton University, where he is currently a PhD candidate, and has been a student of Louis Andriessen, Donnacha Dennehy, Paul Lansky, Steve Mackey, Dan Trueman, Dmitri Tymoczko, and Barbara White.

In addition to his position at The College of New Jersey, where he teaches an introductory course in electronic music, he is also on the faculty of University of the Arts, as well as West Chester University, where he directs the Center for Music Technology.  In the past he has taught theory, composition, and music technology at institutions such as the University of Illinois, Princeton University, and Rutgers University-Camden.