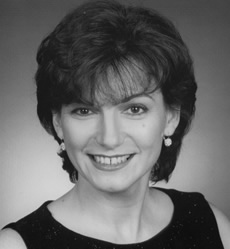 Mezzo-soprano Dr. Nora Sirbaugh is an Adjunct Instructor of Voice at The College of New Jersey where she teaches:

She is also currently an Instructor of Music and Voice at Mercer County Community College. Previously, Dr. Sirbaugh taught Voice at the Peabody Conservatory of Music and at Temple University.

Dr. Sirbaugh was the recipient of the Peabody Development Grant, a research grant for study of original manuscripts in Gloucester, England. In addition, she was awarded the Peabody Scholarship, Temple University Opera Scholarship, and The Delius Trust from the United Kingdom to fund her 2000 European concert tour.

Dr. Sirbaugh’s solo engagements include performances in major U.S. cities and England, as well as in oratorios and numerous opera roles. Dr. Sirbaugh has studied under Nell Rankin, Wayne Conner, and David Jones, and was coached by John Shirley-Quirk, Phyllis Bryn-Julson, and Thomas Grubb. Her doctoral thesis for the Peabody Conservatory, entitled “Ivor Gurney and His Vision of Gloucestershire in Music,” was on the relationship of Gurney’s music to Gloucestershire. She presented a lecture-recital on that subject with David Goodland and Stephen Peet at the launch of the Ivor Gurney Society in 1995 and published a related article, “Reflections of Singing Ivor Gurney.”

Dr. Sirbaugh has numerous publications to her credit, including contributions to several books and CD reviews for The Delian, The British Music Society News, The Delius Society Journal, and the Journal of Singing.